Viewing: Road To What's Next - View all posts

In March 2020, Brionna Taylor got killed. And, Washington state got put on lockdown, due to Covid 19. I felt like we were imploding. There was so much that needed to be said ...and done. I just didn't know what ...I was scared for all of us. I wasn't sure what this song would be ...until I said it.

"Virus" is the culmination of all that ...and more. Enjoy!!

This is my piano. Her name is Gertrude. I don't understand how people don't name there pianos. Each one can be totally different in tone and timber ...much like the voice.

Gertrude is about 107 years old. Ohhh and she sounds that deep and rich. 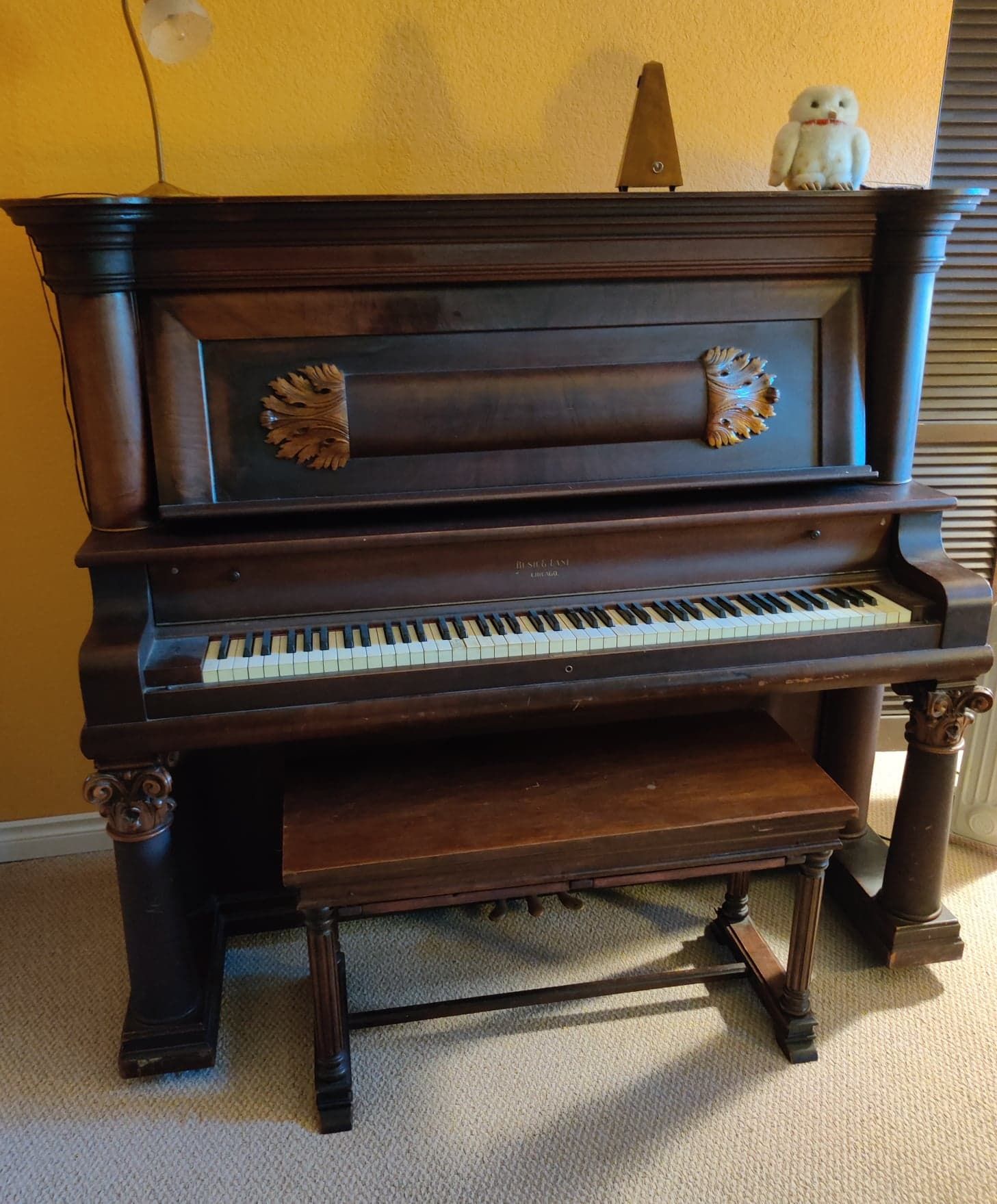 Spoiler Alert - viruses come in all shape and sizes. #jenepherwhite,#virus,#neosoul,#blm

The last submission to The Voice got no response. Since it was the clearest picture of me, as an artist, yet. I have decided to stop trying.

So, I have been meditating on it, a while. And, what's come up for me, is what I really want. So, I asked myself what that would be??? Immediately, the answer came to mind. I want to be featured on a TV Show that presents the "Culture Changers" of female musicians. No contestants, only featured musicians. And I would like Alicia Keys, or someone like that. To head up the show.

I went to work on the idea. And now, I have a treatment for it. That is what you need to present your idea, to the right people. And am now doing whatever I can, to get it in front of her.

Also, I finished the vocals on "Virus," yesterday. Just the mixing, left. Then I can release it!!

It's Here!! The music video for Elevator Pitch (feat. The Wanz and Elnah Jordan)!!

Who hooo! To every creative person out there ...this one's for you.

Today, I did a submission to The Voice. The thing that is different about this time. Is that I finally have something to say. A way to " be creative" in the "Intro" section of the submission.

I submitted the song, itself, for Songland; in June. My hope was that Adam Levine would take notice of the song, at Songland. And, somehow talk with The Voice folks. And I would get in, that way. But, since then, I've reconsidered.

So, the Voice Submission process requires videos of an Introduction of the artist, and of 2 songs. And they do say, "be creative" for the Intro. So, I have!!!

My Intro portion is Elevator Pitch.

"Elevator Pitch" was inspired by the "Intro" section of the Submission process for The Voice. For the "Intro" they want your name, where your from. Then they ask you to "be creative." This is the best way I can think of, to be creative.

As the result, I created the song, produced it with Jason Shavey. Got The Wanz and Elnah Jordan, to sing on it, with me. Then got LZane Jones and Jeremy Berg to help me make the music video.

Mine was singing acapella for you. What's the fear that you've walked through, this week?

This week song is "All Of Me' by john Legend. Enjoy.

The song I'm singing is "Kiss From A Rose" by Seal. Enjoy.

This song is "Lil Darling" by ZZ Ward.

I've got an Open Call Audition, next month, for The Voice. It is the first time I am auditioning for them. Up until now, I've only submitted myself.

I've chosen this song to audition with. Because it's the closest to the songs I write; includes Rap and Belt. : )

The song is "Prepared" by Jill Scott.

Please join me in busting through this wall of fear that has us "locked down." There is not a lot I can do to make Covid-19, non-existent. But, there are a ton of things I can do that will make my life; be more than about, being lockdown.

I invite you. Share some fear you've walked through, this week ...be it big or small. And, we'll get through this together!

The song is "I Love You More Than You'll Ever Know" by Donny Hathaway.

Please join me in busting through this wall of fear that has us "locked down." There is not a lot I can do to make Covid-19, non-existent. But, there are a ton of things I can do that will make my life; be more than about, being lockdown.

I invite you. Share some fear you've walked through, this week ...be it big or small. And, we'll get through this together!

July 13 came and went with no call from The Voice. Not gonna lie I was a little disappointed. But, life has kept me so busy that I haven't had the time (to dwell). In the past few weeks, my toy poodle, Maddie, passed after 16 years. Maddie RIP. I love you, forever. Then, I sliced up my hand with an electric sander while I was attempting  to sand the back deck. And, of course, music... music... music..: )

BTW - At a friends nudging, I submitted myself for AGT. I had never done that before. Because, I want to be taken seriously as an artist. I want a career in the music industry. And I assumed that AGT would not be the place for me. But, she talked me into it. So, I could hear anytime between now and next spring ...or not at all ...gawd, I hate the audition process.

See you next time!

They got this new thing. Where you sign up for an Open Call Audition in one of the cities that are available. For me, that was San Fransisco. Then, you post a blacked out video of an audition song, on Instagram. I sang a "Kiss From A Rose." If you want to see it, the video's on my IG profile. https://www.instagram.com/jenepherwhite/

I figured I would post the audition. Then if I wasn't chosen by 2 days before the Live Auditions. I would cancel my airline flight (minus $150), the car, the hotel, and the spot in the live Auditions. That way I would only be out $150.

I did not get chosen ...I'm not gonna lie. I was pretty disappointed that I didn't get chosen. you'd think I'd be used to it by now.

But, I'll be releasing my new single, "Out" in a few months. So, there's that to look forward

In 2013,there was the revitalization of my soul ...I sang for the first time as a solo artist in over 20 years. The time away from music was due to my brain hemorrhaging ...and a lot of fear of performing (The basic history is in my Bio.: )

When I sang again, my whole world opened up to me. Up until that point, I was sure I would never perform again. I had many reasons, starting with taking care of myself. Making sure I had a consistent job and that it provided health insurance. As I saw it, it was an either or proposition. Either sing ...or take care of myself.

Ok ...there was the way I looked, also. After the BH I was droopy on the right side, and I had no balance. Then, there were the subsequent hospitalizations. On top of all that, was the mountain of fear that I had to face, every time I dared to perform.

But, there was a fairly new show out called "The Voice." I, of course, was a solid fan. I did not miss a show. For 2 years I would watch it and not even dream about me being on it. "The Voice" was for when I had a voice.

When I sang again as a solo artist. And I felt the exchange between me and the audience ...and I remembered all the words!  I thought of The Voice, immediately. I started submitting myself. I stopped keeping track of how many times I've submitted myself. I mean, I have all the evidence. But, I just get sad if I think about it, too long.

On the really good side, I had started writing songs, again. Not only that, my latest single, "Out". is soon to be released; on May 5, 2019. And I had a large part in arranging and producing it!! ...who I am becoming as an artist is crazy exciting!!!

I submitted myself for The Voice, again. But, it's different this time. I am ready to get chosen, this season. I have been preparing to sing on The Voice, for over 4 years. But, each time I submitted myself, I had a lingering thought in the back of my mind, "I wonder if I'm good enough?" Then, when I wouldn't get chosen, it secretly answered my question; "No." But, I am not allowing that question to have any reality in my mind. And, I sang my ass off on the submission video.
​The confidence is born from a few things; 1) is the internal work I do to prepare myself for the life I want. And 2), the music I write. My latest release is, Brother Call Me Sister (see above!: )
I am ready...: )

Last Update for 2017!
​I've been working on my own music. I took this season off from submitting myself for The Voice. Mostly cause Alicia Keys wasn't going to be a judge, this season. And, I really want to work with her.
​It's on my Musical To-Do list. Right now, I am working on "Prepared" by Jill Scott. And, I am not sure of my second song ...I'm thinking "Love & Happiness" by Al Green.

​On the songwriting side of the house...
​I'm at present, figuring out how to get "Brother Call Me Sister" to NBC's The Playlist. See, I've already submitted myself. But, I really want them to hear my latest single.

I'll be singing a 30 minute set of mostly Originals at;

Well, I've spent about a month in preparing my second song, "Blues", for the studio. And it went great!
I've still got a lot to learn about marketing my music. But, just the fact that it's out there is pretty awesome!!

BTW - Lesson Learned - NEVER attempt to record 4 songs in one day. You'll be going back to redo the vocals, later.

Unless it's just for a demo.

I've redone the vocals on the first song, "Freedom - When I Got Here." And it is published on CD Baby! Now, I just got to figure out marketing!: )
​https://store.cdbaby.com/cd/jenepherwhite

​I'm on iTunes, Amazon, all kinds of places, to buy Freedom - When I Got Here. But also, if you just want to listen to it go to Spotify!

I had a 30 minute set at Edmonds Tunes! I am so sorry I didn't post it. I got to as many of you as I could.
​The best performance ...yet!! I did 4 of my original songs ...with the backing track that we had just made in the studio!: )

​I have decided to take the advice of my vocal coach ...I am redoing the vocals on approximately a song a month. That gives me time to work on each one, as a singer ...it hadn't even occurred to me that I would have to do that. After all, it's my song!

Music is a language, words are a language, to get her there a language ...and the singer has her language. They're all different. But, they all come from my soul.